What You Need to Know about Chip-Enabled Credit Cards

Thursday, October 1, 2015 marked the beginning of the end for magnetic strip credit and debit cards. With the alarming number of companies hacked for consumer credit card information, it’s about time that security measures were taken. Here’s what you need to know about the new chip-enabled credit cards.

The Story Behind Chip-Enabled Credit Cards

Chip-enabled credit cards are also known as EMV cards, named after their creators: Europay, MasterCard and Visa. They’re supposed to provide you with more security than the magnetic strip cards with which we’re so familiar. The magnetic strip on your average credit card contains sensitive card and cardholder information that does not change. This means that if a hacker were to gain access to that information, they’d be able to make purchases with your card. That small, shiny square you see on your new card (if you’ve already received it) is a computer chip. Unlike the unchanging data contained in a magnetic strip, the computer chip in your new card generates a one-time only transaction code that cannot be used again. If a hacker were to steal a unique code that was generated for a specific transaction and try to use it to duplicate a card, it just wouldn’t work. Experts are hopeful that this new credit card technology will help reduce fraud in the United States.

What Does the New Credit Card Chip Mean for Consumers?

So far, more than half of U.S. consumers haven’t received EMV cards. If you’re one of these people, don’t worry. You’ll still be able to use your magnetic strip card in the meantime. When you do get your chip-enabled card, your checkout process will only be slightly changed. At chip-enabled terminals, you’ll dip your card facing up and leave it in until you’re prompted to remove it. Then, depending on the dollar amount of the transaction, you may be asked to sign or enter your PIN number. After that, your transaction will be complete. Most EMV cards being sent out by banks will still have magnetic strips since many retailers do not yet have chip-enabled credit card readers installed. Online shopping with an EMV card is largely the same as it is with a magnetic strip card. There is no improvement in credit card security, however, when shopping online. So, other than some slight confusion as you get used to the new checkout process called for by chip-enabled cards, not an awful lot will change for consumers. 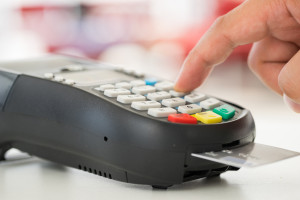 How Will Retailers Be Affected by This New Technology?

Retailers will be have to update their traditional card readers in order to accommodate the new chip-enabled cards. There will be no fine for failure to update, but there will be a liability shift. Typically, the credit card companies reimburse both the retailer and consumer in the case of fraud. Now, however, the merchant will be responsible to cover the charges that result from fraud, which serves as an incentive to update their terminals as soon as possible.

We know now that enhanced security is the reason for the implementation of the new credit card system. Of course, this new system does have its critics. While the nation’s banks have been pleased with the pace at which chip cards are being distributed, analysts have expressed concern that they’re coming out too slowly. The longer it takes for the secure chip cards to be distributed, the more opportunities hackers have to hit the last of the magnetic strips. Also, there has been unease about the new system being put in place at the beginning of the holiday season. Retail locations are already ridiculously busy during the holidays, and with the added confusion of a new, slower checkout process, there will only be longer lines. Perhaps the most alarming apprehension that has been brought to light is that locations that have not yet upgraded to chip-enabled readers will become more attractive to fraudsters. Because of the difficulty they’ll have trying to compromise cardholder information from stores that utilize chip-enabled technology, hackers will be doing as much as possible to do so from stores that still use the insecure magnetic strip readers.

While chip-enabled credit cards will not provide an end-all, be-all solution to credit card fraud in the United States, they will increase security. Online shopping while likely now become the focal point of fraudsters, so it is recommended that you take necessary steps to protect your computer.

Get in Touch With Us
Category: NewsBy Aaron MattsonOctober 2, 2015