What You Need to Know about Windows 10

Windows 10 was released by Microsoft on July 29, 2015. While the Windows update will be familiar to users of previous versions, there will be some new and improved features, too.

How to Get Windows 10

If you don’t already have Windows 10, you can reserve your upgrade and expect it within a few days to a few weeks. To reserve the free update, click the Windows 10 icon that’s located on the bottom right of the system tray. If that’s not available, run Windows Update and install whatever required and recommended updates for your PC. Once you’re in the Get Windows 10 app, click “Reserve your free upgrade” and enter your email. You’ll be notified when it’s ready.

What to Expect with the Windows Update

Cortana is Microsoft’s virtual assistant. You can type to Cortana on any device, but if you have a mic you can talk to it as well. Ask questions and set reminders—Cortana has your back. You can even use Cortana to change your default search engine from Bing to Google.

The Start menu is back with Windows 10. The tiles present in the Windows 8 start button will still be there, but they’ll be next to a Windows 7-like start menu. The new start Menu will allow you to view regularly used apps and use universal search (including the Internet). The start menu is largely customizable, from color to tile size to what even appears when you press Start. 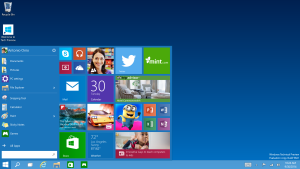 Formerly known as Project Spartan, Microsoft has released a new web browser, Microsoft Edge. Edge is the default browser on Windows 10. It features a screen-grab tool, touchscreen doodling and a notepad. The address bar also acts as a search box.

With Windows 10, there will finally be an option to “Print to PDF.” This means you’ll no longer have to lean on third-party tools to print PDFs.

If you open a lot of windows but you don’t have multiple monitors, you can create virtual desktops to organize them. Use Alt+Tab to move between the apps and then Windows+Ctrl and the arrow keys to scroll between the desktops.

There are plenty of other new features that come along with Windows 10, but these are the ones we’re most excited about. Hopefully, Windows 10 will make PC use an easier process for all users once they’re used to it.

Windows to phase out old versions of IE

Starting in January 2016, Microsoft will be eliminating support for all versions except the latest version of Internet Explorer in Windows and Windows Server. CIOs and endpoint computing managers who run versions of IE prior to IE 11 on Windows 7 will need to take action to reduce potential security issues.

Get in Touch With Us
Categories: News, TCI TipsBy Aaron MattsonAugust 5, 2015